Following our visit in Brandenberg we go to Bernburg, a three hour drive. Our first visual indication that we have arrived is a sign that says, "Beware, Psychiatric Hospital." 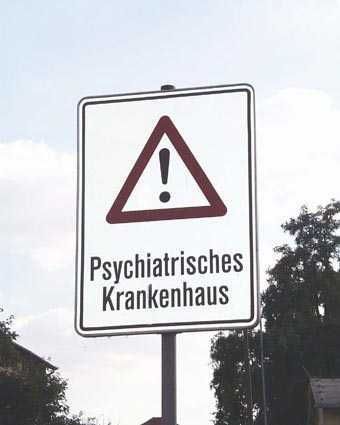 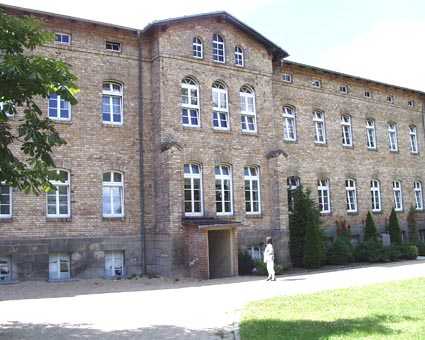 The Memorial site is on the grounds of a psychiatric hospital, now serving over 500 patients, but many of them in a forensic hospital for substance abusers. 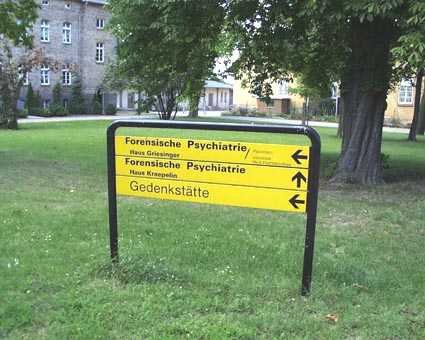 As you can see the killing site is located in a building named "House Griesinger" and the forensic next door is called "House Kraepelin." Both psychiatrists are the most horrible from the 19th century, according to Rene. They had been the most influential for the pschiatric ideology "Griesinger was the inventor of "mental illness" as a brain disease, and Kraepelin was known as the "father of schizophrenia."

The hospital are not really connected, however, a strange encounter became mine when I asked to go to the restroom. I entered a hallway that was locked at one end which entered a part of the psychiatric hospital. When I left the ladies room, I turned the wrong way and knocked and knocked to ask someone to open the door. Titters and giggles were heard from the other side, with the statement that they did not have the key. (obviously current patients). I was rescued 10 minutes later, enough time to give me a full sense of being in the place.

I doubt that we will have a more graphic picture of what happened or candid account as we did at this site. 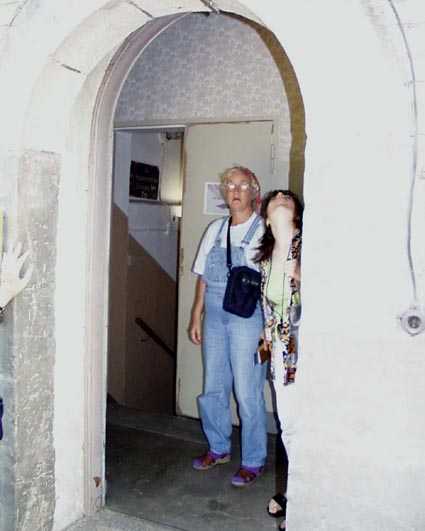 We were taken to the basement where we given a "step by step" account of what took place. Being a writer of manuals recently, I could not help finding myself wanting to write #1 you do this, and #2 you do this. At any rate, this is what we were told, 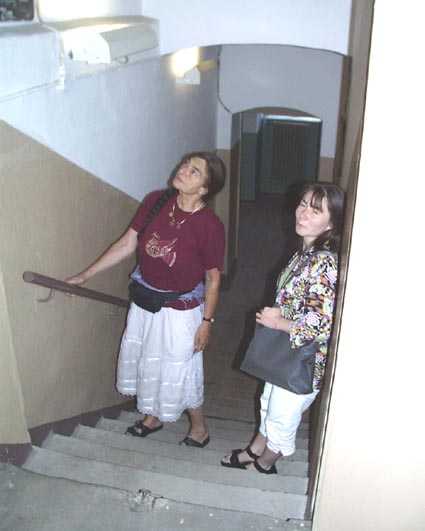 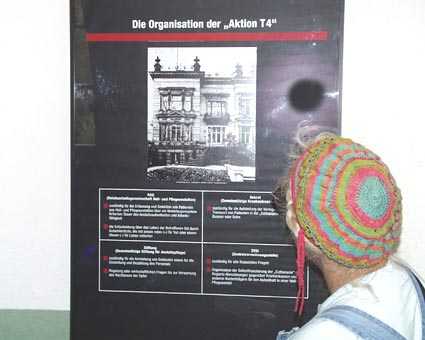 The basement, "gas chambers" were room enough to kill 1,400 persons a month. Several rooms are linked together, and are the path to which persons will be taken during different stages of the "killing process." The persons who were brought here were only "mentally ill"every day 65-75 people. Mrs. Hoffman stated emphatically that operations occurred only Monday through Friday, not on Saturdays or Sundays or holidays. People were brought by bus and ushered into the first room where their clothes were taken and photographs were made of them. Each person was interviewed by a Doctor who looked very carefully for some physical reason that could be given to the family as the cause of death. If a person was brought to the site who was from the city of Branberg, they were either taken to a different location, or a different location was listed as the place of death. Each person had a little bag for their belongings which ultimately became the property of the state of given to the family.

Occasionally cries for help were made to families, but families did not believe their family members. The truth was always believed to come from the doctors.

Mrs. Hoffman states, "Next station will be the gas chamber." We all enter a room which has a small window. 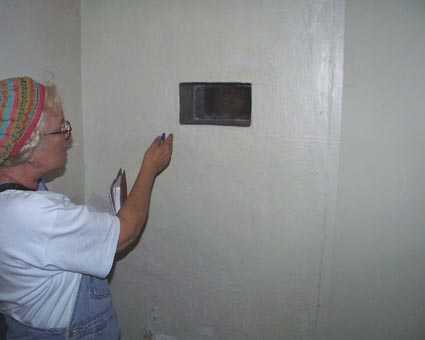 The window was used by the doctors to watch and make certain that death had occurred. She showed us the side room where bottles of CO were kept. After people were stripped of clothes, and checked for records, etc., they were all taken to the shower room to be gassed in the room at the same time. 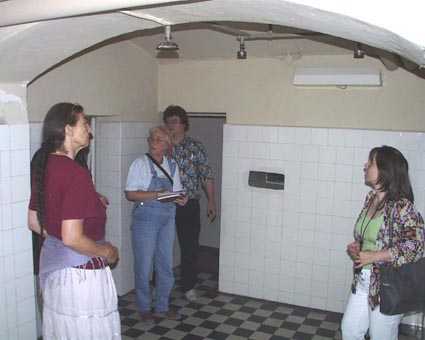 Three to five minutes are needed for gas to float into the room, followed by 20 minutes wait time. Then, the room is kept closed for one hour. Afterward, the bodies are hosed, and cleaned. Each body is carried by two persons one by one. Bodies are then taken to the dissection room. 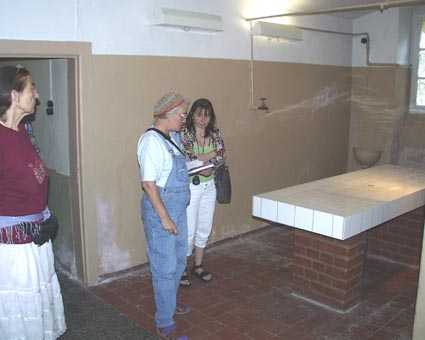 We enter the dissection room which still has the table where bodies were laid. Brains and other parts of the body were removed for research. Mrs. Hoffman states, "Lots of these brains are still in Berlin."

She states that the persons who were the staff, etc.were regular people not monstors. We spent much time discussing the fact that even today many people either do not believe this happened, i.e. journalists, doctors, and others, Or, they believe that the action was somehow justified, Or, they don' t want to know about it.

In contrast to the lack of interest with persons who were killed as "mental patients" the persons who were later killed because they were Jewish are commemorated with a candle memorial which is in the last room, the room with two ovens. I had some sort of block to the ovens, and started to block information. (Your own imagination will tell you that there was some discussion about cremation).
Mrs. Hoffman stated that the reason that the Jewish community placed a memorial placque was because they are more politically conscious and aware of the importance of honoring and remembering. She added that "mental patients" are not politically motivated or active in this area. The chimney outside represents the final last stage. 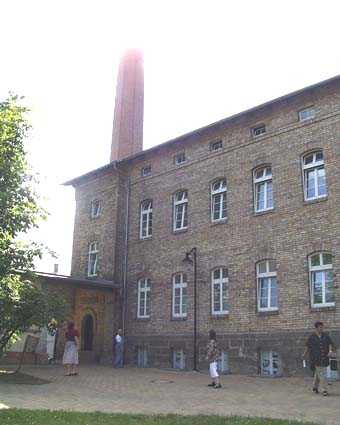 Mrs. Hoffman tells us that this whole operation "was very simple." Everything was built in four weeks. Berlin gave final approval that everything was perfect.

We ask many questions. One of them, "What about the other patients that were here?, Did they know what was going on? We are told that patients did know about it, and were often told, "If you don't behave you might be sent to the gas chambers too." In fact Mrs. Hoffman makes a clear distinction, that people in the psychiatric hospital were considered the "normal patients", and did not qualify for the gas chambers. It was only people who met certain criteria who qualified, i.e. over five years in hospital and complete inability to take care of themselves.

We all had different opinions about Mrs. Hoffman, but agreed that she had been quite cooperative and helpful. Hagai wanted to know whether she ever spoke out politically. She made it clear that she understood the significance and the horror, but did not feel free to be political. She does make talks occasionally to other professionals, etc. , but does not see herself as political.

We leave there having taken many pictures and arrive at a youth hostel in Naumberg which is a pleasant contrast. High in the mountains that somehow feel like the Alps, (that is if you're from America). We share the hostel with a large group of families who are in a Bahai Gathering Retreat. Two women are from Florida visiting their nephew. Two of us stay up listening to the nephew playing the guitar. All in all a pleasant evening.

One other anecdote: I am excited to be in Heidelberg and convince everybody to go into the Old City to eat in a German Cafe. We choose a nice one on a busy cobblestone street reminding me of St. Augustine, Florida. When I go to order German food, I am told it is Italian Week. Oh Well. I ordered a German Beer. One other visit was made to Stuttgart. A report follows.